Many of us in Bangladesh use dot (.) after short name in birth registration and national identity card. But should you use the (.) while applying or renewing your passport? I will try to share the correct information about this dot.

You may want to apply for a new e-passport or renew your MRP passport to an e-passport. In this case, if your NID has a dot (.) in any part of the name, how do you apply, will you use the dot? I am telling you in detail whether or not to do it.

Disadvantages of using dot in name in passport

The fairly recognized form of the name is that the name will have three parts First Name (Given Name), Middle Name, and Last Name (Family Name). Like George Walker Bush.

Here George is First Name or Given Name. And Walker is Middle Name, Last Name is Bush.

Although there is an official middle name, using it is optional. Most of the time it is written as an initial such as George W. Bush instead of George Walker Bush

But in Bangladesh when we write the name like this A.H.M. Kamal Uddin, 3 initial names (A.H.M.) are used as the first name.

In this way, no letter should be used as First Name or Given Name. Moreover, 3 letters with dots mean 3 initials of 3 Names. Foreigners get confused seeing three initial names as the First Name where a single name should be used.

It’s not the correct way to abbreviate First Name and Last Name in passports or other important documents. Middle Name may not be used or can be shortened by just one letter with or without dot (.).

In this case, using dot (.) is regardless. That is, George W Bush or George W. Bush is the same. Here it creates no confusion.

You should read- What Color to Wear for Passport Photo

No Dot in Name in MRP but NID has Dot

If you have an MRP passport earlier, even if you had written dot (.) in your name while filling online application form, it would have automatically got deleted.

Even when anyone had applied by writing dots in the handwritten application form, passport office operators entered the information without the dots. So there is no dot in the name in MRP.

There is no reason to get too upset about this dot (.) in any part of your name. Submit your application without the dot (.).

Whether dot can be used in name in e-passport application

We all may know that e-passport information should be exactly like National Identity Card or Birth Registration. It is absolutely correct. To apply for an e-passport, you have to apply according to the information of NID.

In that case, your question may be your name is Md. Kamal Uddin in your NID then how to apply for a passport? Here, just write MD KAMAL UDDIN in the passport application form, i.e. write without the (.) dot.

However, if you apply for a passport with a dot (.) in the name, the passport office will not accept it.

So, what should you do then? Let’s know how to solve the problem if you put a dot in the e-passport application form.

You have submitted the passport application with a dot in any part of the name. In such cases, the passport office is not going to accept your application. Let’s know how to solve the problem in this case.

Passport offices will generally not want to accept any mistakes in the passport application. You have to correct it and re-apply.

But you cannot apply again unless you cancel the previous application from the passport office. It will take 2/1 day more time to cancel the wrong application and re-apply.

In that case, the easiest and best way is to apply for a correction to the passport application.

You have to write an application to the Assistant Director/Deputy Director of the Regional Passport Office.

Mention in the application that your name in the passport application is mistakenly written MD. instead of MD so you want to modify that wrong name.

In view of your application, the passport office will make necessary corrections while taking your biometrics.

As there are some complications and difficulties in using dot (.) in names, it is the best practice not to use dot. Using dot or not is the same thing. So always avoid using dots in any document.

Visit eservicesbd.com regularly to get answers, tips and tricks related to passport, national identity card, birth registration, and VAT-tax. For any direct queries, please contact on our Facebook page- Eservicesbd.

There is MD on my MRP but MD. in on NID, How should I apply for an e-passport?

It’s not a problem if all the information on NID is the same as the previous passport except the dot. Just apply for an e-passport avoiding the dot in the name.

I have MD in MRP but MOHAMMAD in NID card, how to apply for a passport?

Founder of Eservicesbd and a Professional blogger. I mainly write about online business, digital marketing, and blogging. On Eservicesbd, I share information about e-services for citizens, passport, and visa information. 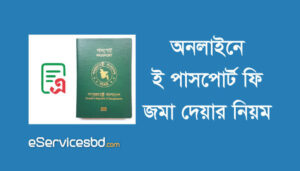 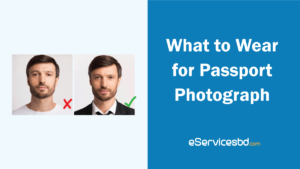 Do you have the schedule for taking a passport photo? Learn the guidelines and what you should wear for the best photo in your passport.

Bangladesh has started issuing e-passports to people. I think you may be interested to know what an e-passport is and What the differences between (MRP) Machine Readable Passport and E-Passport are. What is an E-Passport? According to the Department of Immigration and Passport information, the e-passport is a biometric passport with an electronic chip. The… 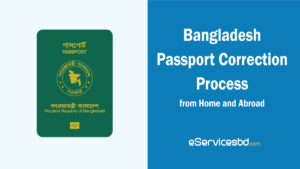 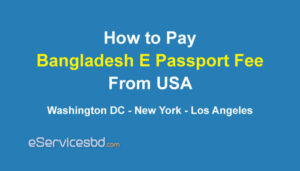 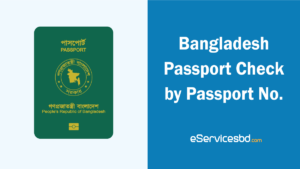 Do you want to find your passport information? Let’s know how to check your Bangladesh passport by passport number.